The profusion of nucleotide-activated sugars in plants and bacteria is puzzling. Why is a single form of activated Glc not sufficient in plants, which use UDP-Glc as substrate for cellulose biosynthesis and ADP-Glc as substrate for starch formation? Similar apparent redundancies are observed in bacteria. Could such a fragmentation of nucleotide-activated monosaccharides be related to a defense strategy against parasites, viruses and bacteriophages? Such pathogens divert the host metabolism for their need. An increased complexity in metabolic pathways may enable host cells to cope with such pathogen-driven diversions. Accordingly, the proliferation of nucleotide-activated sugars may a form of metabolic immunity (see glycans and evolution). 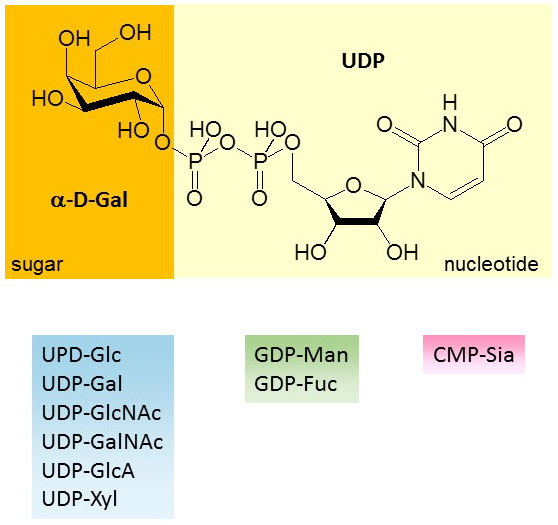 Figure 15. Structure of UDP-α-D-Gal and list of nucleotide-activated sugars found in animal cells.

Nucleotide-activated sugars are involved in the biosynthesis of large molecules like glycans, oligosaccharides and polysaccharides. Furthermore, the nucleotide-activated sugar UDP-GlcA is also widely used for the detoxification of xenobiotics by UDP-glucuronosyltransferases (UGT), which are mainly expressed in the liver in humans. The addition of GlcA to apolar molecules increases their solubility and thereby their elimination from the body

Nucleotide-activated sugars are also important for the replication of some viruses. For example, the bacteriophages T2, T4 and T6 express glucosyltransferases that add Glc from UDP-Glc to hydroxymethylcytosine, thereby protecting the phage DNA from bacterial restriction enzymes. Similarly, baculoviruses express glucosyltransferases that transfer Glc from UDP-Glc to the molting hormone ecdysone, which inactivates the hormone and maintains the infected insect at a prepupal stage. Also, small molecules like the antibiotics aminoglycosides, e.g. neomycin, kanamycin and streptomycin, are synthesized from nucleotide-activated sugars. 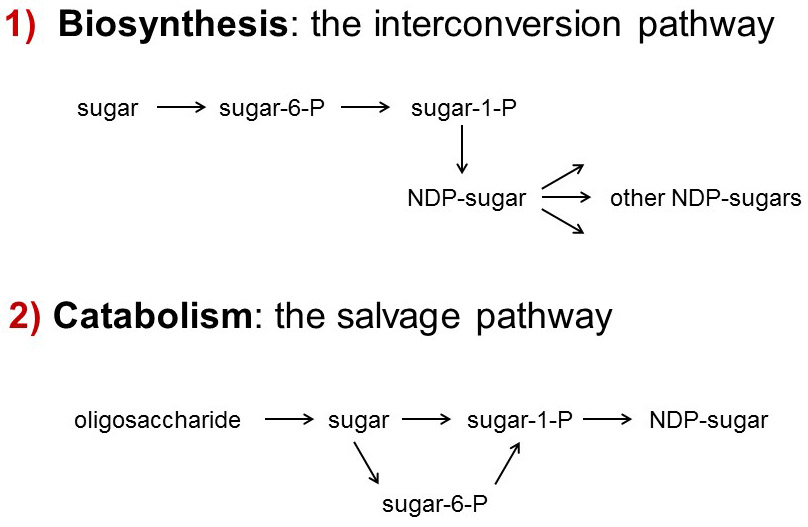 Figure 16. Biosynthesis of nucleotide-activated sugars through the interconversion and salvage pathways.

Despite the limited set of interconverting activities in animals, these reactions are essential to the biosynthesis of nucleotide-activated sugars and thereby to the formation of glycoconjugates. For example, UDP-Glc can be formed from Glc-1-P and from the intercon¬version of UDP-Gal (through 4-epimerisation). In fact, the interconversion from UDP-Gal represents a major source of UDP-Glc in animal cells, as shown by the incorporation of [3H]Glc in glycans after metabolic labeling of cells with [3H]Gal. The interconversion of nucleotide-activated sugars in animal cells is controlled by rate-limiting enzymes, which are inhibited by the end-products of their respective pathways. Along this line, UDP-Glc dehydrogenase (UGD) is inhibited by UDP-Xyl, glutamine:fructose-6-P acetyltransferase (GFAT) by UDP-GlcNAc, UDP-GlcNAc 2-epimerase/kinase (GNE) by Sia and GDP-Man 4,6-dehydratase (GMDS) by GDP-Fuc.

Deficiency of interconverting enzymes often leads to metabolic disorders characterized by the accumulation of toxic intermediates and by defects of glycosylation. For example, mutations in the UDP-Gal 4-epimerase causes a mild form of galactosemia, a disease where patients have to lower their dietary galactose intake to reduce the accumulation of toxic intermediates such as galactitol.

Another defect of nucleotide-activated sugar interconversion is given by the deficiency of the rate-limiting enzyme UDP-GlcNAc 2-epimerase (GNE). The GNE protein includes two catalytic domains, the first one with the 2-epimerase activity and the second one with a ManNAc kinase activity. Mutations in both domains lead to a reduced activity and thus to low biosynthesis of Sia. Surprisingly, the resulting disease, called Hereditary Inclusion Body Myopathy or Nonaka Myopathy, is rather mild considering the broad usage of Sia in glycoconjugates. The reason of this unexpected mild phenotype is probably related to the important contribution of the salvage pathway to generate enough CMP-Sia for incorporation into glycans. However, it is worth noting that the inactivation of the GNE gene in mice leads to embryonic lethality, which demonstrates that the importance of Sia biosynthesis for early embryonic development.

As mentioned previously, GNE is a rate-limiting activity in the synthesis of Sia since the enzyme is inhibited by CMP-Sia. Some mutations in the GNE gene in fact do not inactivate the enzymatic activity itself but abolish the allosteric effect of CMP-Sia, thereby opening the gate to a production of Sia ad libitum. Needless to say that such an excess production of Sia is not healthy and leads to the disease sialuria, which is characterized by increased presence of Sia in urine (hence the name sial-uria), hepatosplenomegaly and airway infections. 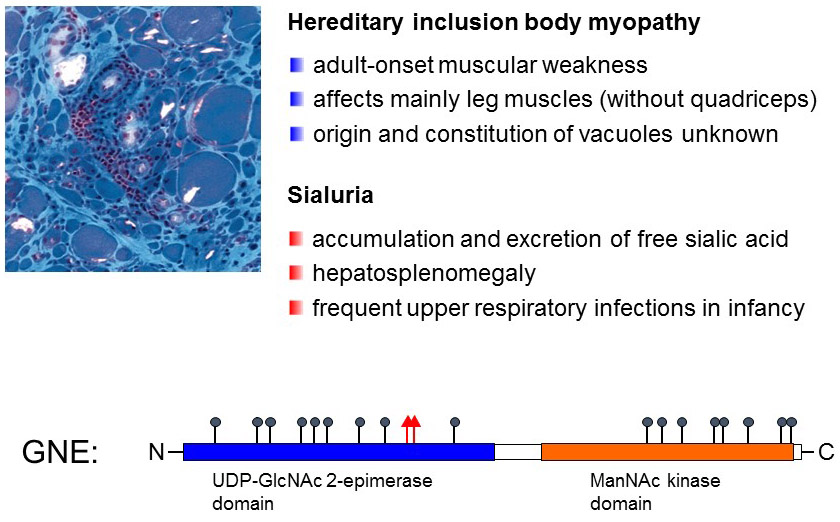 Plants and bacteria produce a multitude of nucleotide-activated sugars and thereby rely extensively on interconverting enzymes to synthesize these donor substrates. These nucleotide-activated sugars are mainly involved in the biosynthesis of complex cell wall polysaccharides. Note that in plants and bacteria, a specific carbohydrate can be linked to different nucleotide. For example, in bacteria Glc is linked to UDP, GDP and TDP. In animals, carbohydrates are only found linked to a single type of nucleotides.

A significant portion of carbohydrates are not synthesized de novo but recycled through salvage pathways. Monosaccharides like Glc and Gal are taken up in the gastrointestinal tract by dedicated transporters. By contrast, complex oligosaccharides, such as those found in maternal milk, are not digested and absorbed in the intestine. Within cells, glycoproteins are glycolipids are continuously broken down in lysosomes, thereby generating new building blocks for the synthesis of new molecules. The biological importance of glycan recycling in lysosomes is illustrated by lysosomal storage disorders such as Fabry’s and Gaucher’s diseases, in which deficiency of galactosidase and glucosidase enzymes lead to the toxic accumulation of glycolipids in lysosomes.

As mentioned previously in the context of Hereditary Inclusion Body Myopathy, Sia is also extensively recycled in humans through the salvage pathway. Furthermore, Sia appears to be taken up from food products in the intestine and incorporated in glycans. It has been shown that NeuGc, which cannot be synthesized in humans, is indeed incorporated in the glycans of multiple human cell types after ingestion of dietary products rich in NeuGc, such as red meat. The incorporation of NeuGc in human glycans modifies the susceptibility to bacterial toxins, such as the subtilase cytotoxin SubAB produced by Shiga toxigenic Escherichia coli, which rely on this type of Sia to target host cells.